The 3 missing pieces that are stopping your success 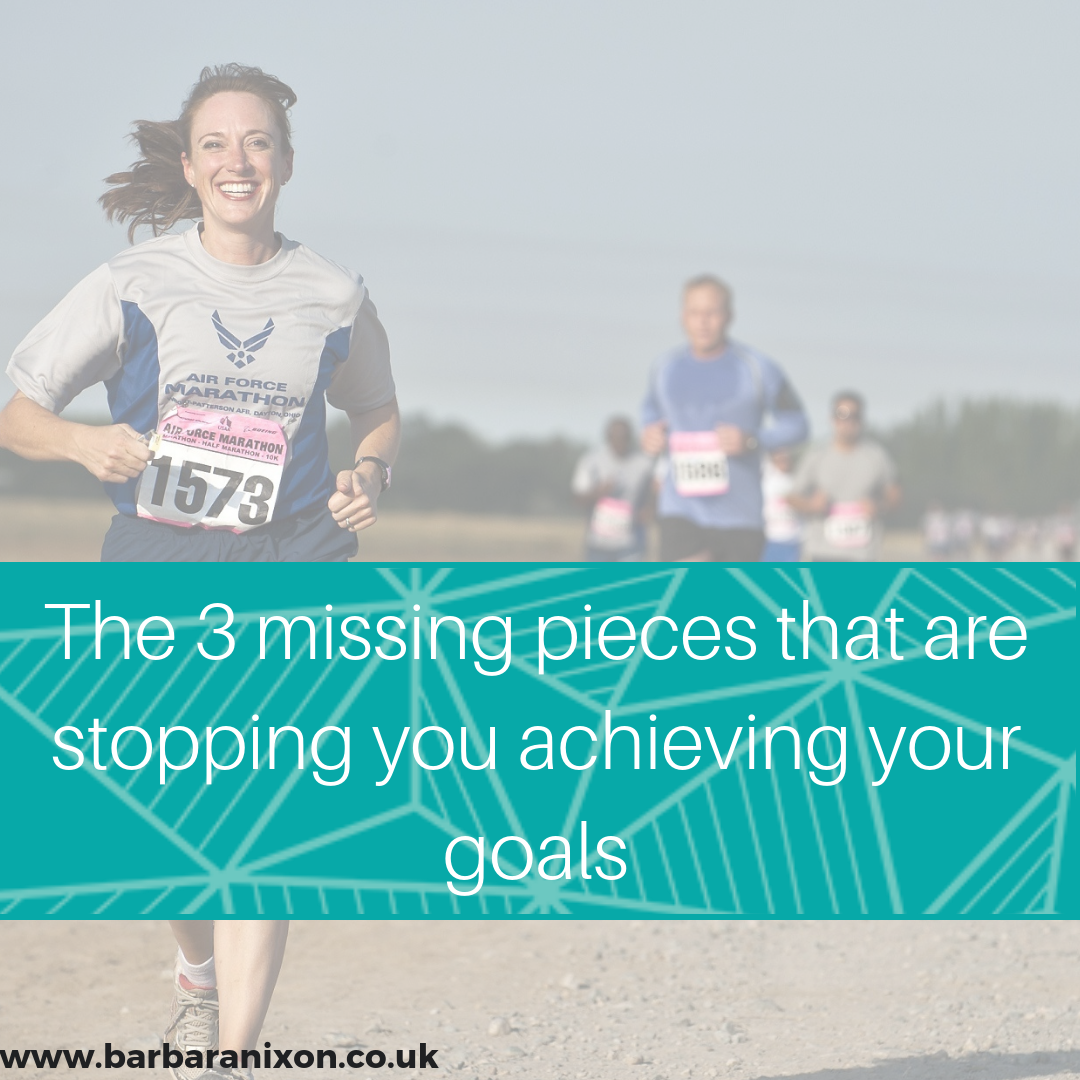 This week I started running again.

I say again, because I’ve had an on/off relationship with running for many years.

Here’s the process that I go through:

I have to say that last year was quite good as I kept going for about 9 weeks before I stopped, and if you were to ask me why, I could easily reel off a list of viable excuses like…”it was the Beast from the East” (this did have some impact to be honest), or “I really needed new trainers”..but in reality, if I’m totally honest and vulnerable here it’s because of 3 things:

#3 I didn’t embed the habit

Admitting this is a bit tricky for me, especially writing this down so publicly, as these are the exact things that I spend a lot of my working life talking about as they are all crucial in change in my opinion…but hey ho…here we are.

So, let’s talk about how I could have done this differently.

This is so important, as it’s the destination that you’re putting into your GPS.

You don’t get into your car and type in….”erm…I think I want to go here, but maybe I don’t want to go as far, or maybe I’ll go further, let’s just see how we get on.”

You type in an actual destination.

The place where you want to end up.

By being really really clear on your final destination it’ll make getting there easier.

Don’t underestimate the power of visualisation. Yes it might seem a bit woo woo but in actual fact your brain doesn’t realise that it’s not true…and it feels like it’s already achieved the goal.

Picture yourself doing it.

Imagine how it would feel before during and after and live the moment in your head.

There’s a reason why athletes visualise their game before they start…because it works and it helps with #2.

#2 Working on your mindset.

This is VITAL for your success!

You have to believe that you can do it, otherwise you just won’t be able to.

Now this sounds really simple, but this bit is easier if you really cement your goal and are able to visualise it.

‘You can’t really do this’

‘You’ll never be able to do it’

‘You haven’t got time’

‘You tried your best but…’

‘You’ll do it when (the kids are older, you have more time, the weathers better etc)

and the scary bit is that you’ll believe it, so when this happens you have to do 2 things.

Call yourself out on your nonsense...just as if your most negative relative (yep we’ve all got one) was saying this to you face to face..

Embedding your habit is the missing piece in the puzzle. I have to say I’m a massive fan of habits, they’re our brains way of putting us on auto pilot – so we can do things whilst zoning out and thinking about something else.

However it takes time to create a habit – but once you do, it’ll feel like the most natural thing in the world to keep doing. Your whole being will be …‘come on, let’s go for a run!‘ It’s like brushing your teeth…chances are you don’t need reminding to do that every day.

There are loads of differing opinions on how long it takes to create a habit. From 21 days to 60 days and everything in between. In my humble opinion it takes as long as it takes, depending on what the habit is and you as a person.

So you just have to keep doing it, until it becomes second nature. A case of short term pain for long term gain.

There are a few things you can do to keep yourself on track…here are a couple I personally use.

Reminders in my phone – For any new habit I literally set an alarm in my phone to go off to tell me to do it. Watch out for when you see the reminder and just switch it off and go back to watching telly. The rule here is that when it goes off, you have to go do it, otherwise it’s pointless!

What I call ‘The Reverse Advent Calendar’ – This is a bit random, and so simple it’s ridiculous, but works every single time for me. Here’s how –  I get an A4 bit of paper and draw loads of squares on it for the number of times I want to do something. So let’s say I want to do something once a week for a year, I draw 52 boxes on the paper. Then I stick it somewhere I can see it every day. Then every day when I do that thing, I colour in one of the boxes. Like I said, this is so simple but works wonders because I never want to leave a box blank…It’s kind of a competition with myself.

An accountability partner – Get someone who has the same goal as you and hold each other accountable. This is great, as you’ll be able to motivate each other as you go and help each other out.