How to make your habits work for you as a leader 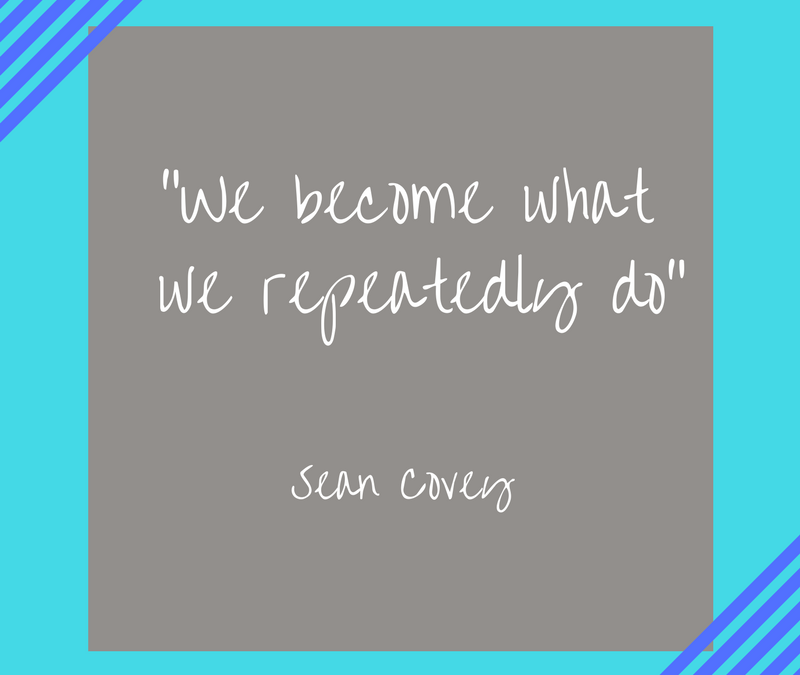 Today I’m preparing for a webinar I’m delivering in a couple of weeks called ‘The 6 daily habits of a successful leader’ when I remembered a chat I had with my 17 year old son just this week.

Just to put it into a bit of context, he’s got exams coming up.

“So, if you start doing your revision every day, it’ll soon start to be a habit, and it’ll get easier” I said…trying really hard not to nag.

“Oh, mum” He sighed “But creating a habit…that’s so much effort!”

And there it was, the perfect answer and the reason that so many of us battle with habits all the time. Effort! And the thing was that I couldn’t argue. In fact I agreed. Yes, he was right. It would be effort.

Habits are bonkers like that. The very nature of a habit is for our brains to have a short cut to do something we do all the time – so we don’t really have to think about. Like driving a car, riding a bike, making a drink and brushing our teeth. Habits, by their very design are there to make things easy.

But that’s where it gets a bit tricky, because in order to consciously create a habit (or even break one) we have to put in some effort. Which is why so many of us either don’t bother at all or give up after the first hurdle and we just get used to the way things are, even if we don’t like it or it doesn’t work for us anymore.

That said. Once the effort has been made – that’s where the magic can really start to happen and you’ll see the results that you really need.

So, if you’re ready to make some changes to your daily habits here are some ideas…

1.Become aware of your routine and what you do in your day.

Instead – for a few days have a go at analysing your day and see what you do that really works for you and what really doesn’t. Or what would work better but you haven’t done yet. Make a note of these and aim to change them a bit at a time.

2. Look for the changes you can make that’ll make the biggest difference with the least amount of effort.

We all have habits that just don’t serve us anymore or that make our lives more difficult, stressful or just plain annoying. An example being – I had a habit of dumping my keys around the house. This then caused me to be always looking for my keys. For the longest time this became something I did and that I really didn’t like about myself. Then one day I realised that this didn’t have to be me. I could change it if I wanted to.  Now, although it was an effort to keep reminding myself to do something different, the thought of going back to how it was is by far worse than the effort it’s taking to remind myself to look after my keys.

Like a lot of people, I went through a phase of every year wanting to get fit in January, with a plan that I’d be like Lara Croft by March, and the way I chose to do this was by going all in. All or nothing! Do or Die! Yep, and you guessed it, by mid January I’d given it up as a bad job.

Just like if you were to jump into a bath of freezing water; immersing yourself in a new habit can sometimes feel like too much and a bit of a shock to the system. So, if the thought of creating a new habit or changing your routine feels too much, go piece meal and do it a bit at a time. Small incremental changes are much better than nothing and can often give you the best results.

Sometimes just the thought of doing something different or creating a habit feels like ‘effort’ before you even start. So, instead, re-frame it by ‘just trying something different’. For example, ‘today,  instead of keeping my phone by my bed and checking it before I even have a stretch, I’m going to try leaving it downstairs and see how that feels.’

If this sounds like the best route for you, make yourself aware of how you feel and what value it’s given you so you can motivate yourself to keep doing it. For example – by looking after my keys I save 10 minutes on a morning not looking for them which gives me more time. I also feel less stressed.

By being aware of how it’s improved your day, you’ll have something to boost you when you try to revert to your old ways of working.

I’d love to know what your thoughts are about habits in your day let me know by leaving a comment and if you’d like to have a listen of the webinar ‘The 6 daily habits of a successful leaders’ Sign up below.